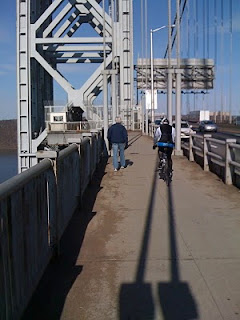 I can't emphasize this enough: when the weather's good, we in the Northeast feel a peculiar anxiety to make the most of it. I realized this years ago when I visited a friend at Stanford University, in Palo Alto, California, during August and discovered that when every day is beautiful a most calming feeling began to surface. I didn't feel that rush to go out because the sun was shining ... because it would be shining tomorrow, and the day after. No worries. Not like back home!

So, this past weekend was a great weather weekend, and, since I am indeed in the Northeast, I took full advantage of it!

I called my friend Philippe(walking on the left, in the picture at right), and we were out early to walk the George Washington Bridge to Tenafly on a sort of Spring '11 Test Walk, a preview of the "Real" walk on April 16 (see my Public Tours).

The weather was magnificent, and the temperature did achieve the mid fifties I believe, but the trees still are wanting their buds of green. I hope and trust that in two weeks green shoots will be leaping out all over! We looked down on the northern reaches of Riverside Park below: 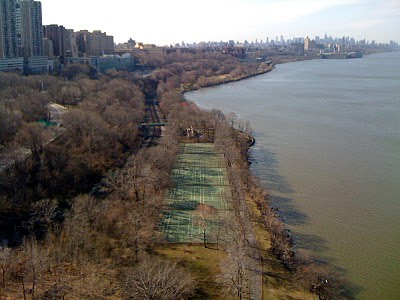 The greenest green isn't grass, which is at the bottom of the picture; it's the tennis courts. The railroad track is to the left, and our North River (the Hudson to most of you!) is of course to the right.

But look again: where's the city? Miles away! We're leaving that metropolis for - ew, the suburbs??! Not so fast! 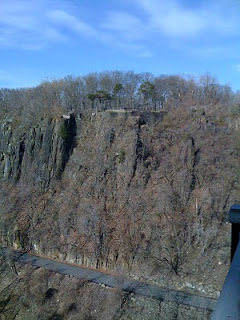 Yes, off to our left is the sheer rock of the Palisades, right below the site of the old original Fort Lee. Note the road cut into the cliff: the Henry Hudson Drive, which goes all the way up to the Alpine Boat Basin - but that's for another time!

We continued on, and eventually left all the noise of traffic and the hardness of the pavement. We entered .... 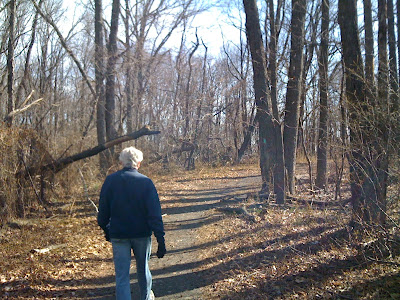 - the woods! Sure, it was brown, but it was wonderfully relaxing to stroll through the trees.

We noticed, however, that there seemed to be a lot of fallen brush and branches, even trees, that testified to a rather rough season just gone by. It didn't look quite to rough last October. Hmm. 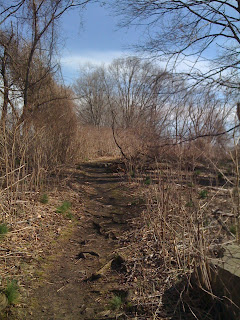 But it was cleared enough for us to walk very pleasurably on the path.

This experience finally reminded me of my boyhood wanderings, and comforted me in the way that familiar things often do. As if I had discovered an old book that I had loved as a kid, or remember a time when a friend and I had explored the woods behind my house and discovered hidden caves in rocky hillsides, or just walked on comfortable with not having any destination, yet confident that we would find our way.

And so, Philippe and I walked along the Palisades. 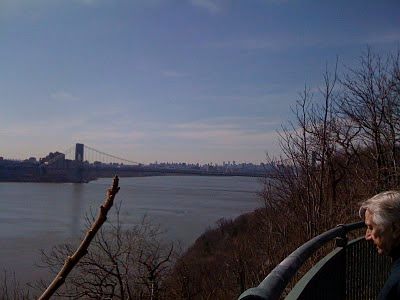 We looked out, toward the Bridge from the railing in Allison Park. And, it's true, we were almost out of our woods interlude. But, the wonder of it all!

Philippe had always wanted to see what was in Englewood, and what kind of homes were there. So, we did see some ... and this one wasn't the largest: 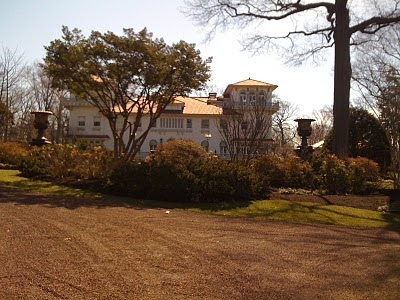 Can you imagine whose this was? Nope! Not telling! Either you walk with me on the 16th, or at least you ask me via the comment section! I'm getting tough now ... so, any takers?

We walked on, and Philippe was beginning to miss the nature that we experienced, and that we both loved, on the trails along the Palisades. But, we were not completely out of nature: 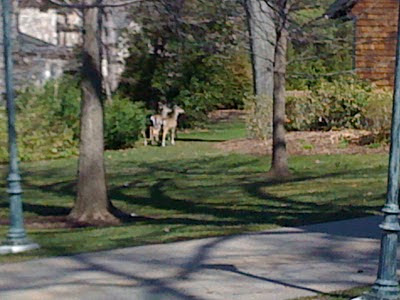 Here are two of the four deer we saw ambling across a lawn in the "suburbs." And, before we even completely left the Palisades we saw more than two geese - we saw two wild turkeys! So, nature is alive in the New York Metropolitan Area - walk with me on the 16th of April and see it all as it begins to bloom!
Posted by Tour Guide Bill at 8:56 AM 1 comment: