Yes, yes, it's been a while! I have been busy leading visitors here and there, over yonder and just around the corner - all kinds of places, for a great variety of people. But there were scenes that couldn't be missed ... like the sunset on July 4, over the heads of people anxiously awaiting fireworks, and our glorious Hudson River: 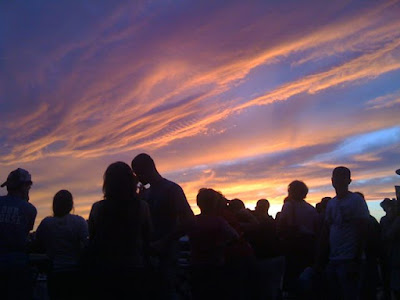 Yes, it truly was a harbinger of a glorious fireworks - which I couldn't get a decent shot of, alas! - but also of a warm and bustling summer in New York.

In fact, there were a lot of happy people coming to New York, and celebrating just for the heck of it! 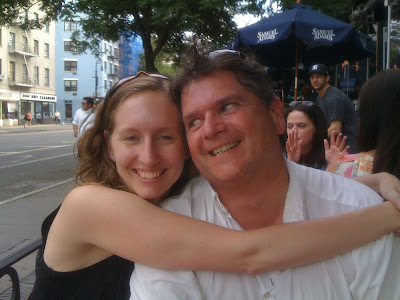 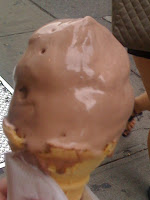 Yes, sometimes when I introduce visitors to my great city they can find on their own reasons to be happy in New York. After all, what's not to like?! After all, Mr. Softee serves chocolate ice cream!

Although I have to tell you that sometimes Mr. Softee can be hard to find - especially if you're returning to the city after a hot day in the country. But, maybe we should stay in town? 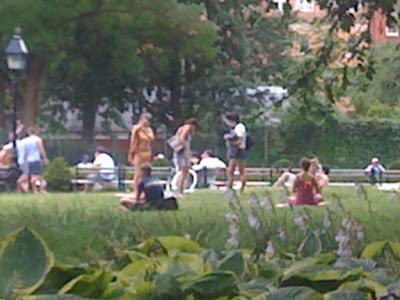 See? Bikinis in Washington Square Park - cooling off on a hot summer's day. In fact, just to the left is another wonderful spot: 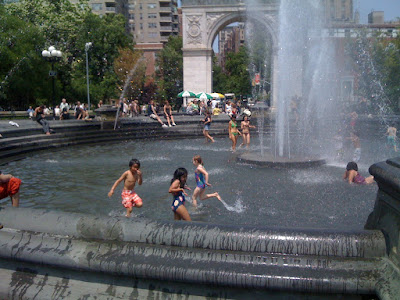 Yes! Right there in Washington Square children are splashing around, and getting really cooled off. And believe me, the temperatures were in the 90s for almost weeks straight, in July.

But what's great about this park, and this fountain, is that it's simply a continuation, and in a great way an improvement of an existing structure and plan. Established on July 4, 1826 by then Mayor Philip Hone, on the 50th anniversary of the Declaration of Independence (and the very day that both John Adams and Thomas Jefferson died!), Washington Square has been the center for many occasions - although now it's most known as the informal campus of the nation's largest private university, New York University. 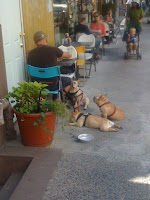 But it's the summer, and few people are thinking about school!

We have to walk our dogs, make sure they're fed and watered - and if we train (and love) them well enough, maybe it's true; they will be among your best friends.

After all, with dogs, you can be the leader of their pack - but only if you 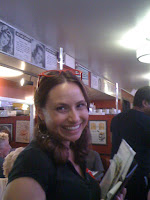 get their respect. Love them!

And if you go to Broadway this summer, perhaps you will drop by Ellen's Stardust Diner - for a bite to eat for breakfast, lunch, or dinner - but also to hear Broadway performers like this young lady break into song right after serving you!

This is, as Mayor Lindsay used to say - although it seem a little forced back then, it's not now: New York is Fun City!

Posted by Tour Guide Bill at 5:03 PM No comments: