Saturday, October 19, 2013, was the day of the first Bridge Walk of the autumn season - and it turned out to be a marvelous day!  Cool at first, but warming, and never threatening any weather issues whatsoever.

But - let me tell you about and show you what we saw on our walk!

As you can see by the picture, one of our small group, Pat, is out ahead on the south walkway on the George Washington Bridge. Did you know that that is the busiest vehicular bridge in the world?  More than 102 million vehicles cross the bridge every year.
So, that will explain why for us that was the loudest part of out walk - but the views can be magnificent: 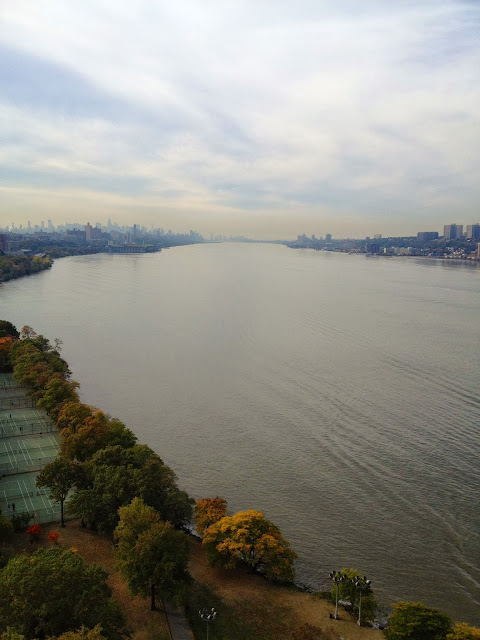 This is no ordinary river; its history is full of spectacular events, mundane every-day necessary events, and untold life-changing events - all from the wonderful Hudson River.  How could we surpass that?!

We didn't!  We just walked across it, and then up a short couple of stairways to the beginning of the Long Path and into the Palisades Interstate Park.

The colors were really just coming out, so as we started we could make out the yellows and oranges on the leaves - and there was a hint of autumn coolness, or crispness, in the air - but it was warming up for us by that time. 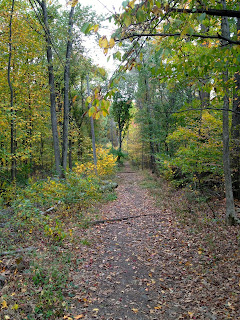 Because it was warming up for us as we reached this beginning, we were very comfortable, and could just stride on down the path - as if we were walking on a road.

This was almost such a sudden change, however - from the noise of cars and trucks on the bridge - to peacefulness.

I sometimes say to my travelers that you do have to look up from time to time: see the cornice work around many buildings, or admire the fine work on the upper stories of what they might think are ordinary buildings in the garment center.

Well, of course when you're out of the city, sometimes it is positively salutary to glance up at the sky above, and appreciate how light plays its magic on the clouds.  Yesterday we certainly had that opportunity. 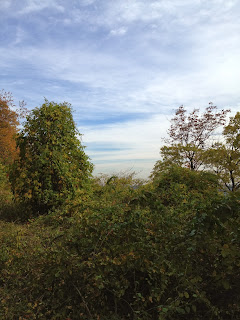 This last picture shows quite a lot of green on the leaves.  Hmm.  I have time yet, you might think.

Yes, and then you might think Central Park provides all the color you need.  Oh, city folk - just enough, perhaps, to remind us all that yes, we live in the natural world, although in a quite organized one, and even one that's quite comforting,

But there's a virtue in - getting out of town!

Yes indeed!  So, plan on November 10 -  I think there may well be still some profusion of colors out across the Hudson on that Sunday, when I make our way across the Great Gray Bridge again.

But yesterday - what did we see?

We were just an hour out of town here, I think, and we were miles and miles away from - Far Rockaway!  Yes, that's where Linda, one of my travelers, had come from that morning - and quite a trek that was for her.  Just the night before she resolved to - yes - get out of town, and called The Street Teacher to reserve a spot - no problem! - and she showed up at the corner of Ft. Washington and 178th Street ready to take the stroll.

She may have come from Far Rockaway that morning, but she was born in Haiti in fact - and never imagined, so she says, that this existed just outside New York City.  Everyone she knows thinks of New York as all buildings, and of Brooklyn as pretty much the same - and now, she said, she knows better.

Surprisingly, and suddenly, we saw that we weren't alone on our path: runners went by us, from both directions, and different times on our walk.  And we met others on the path too - but too abruptly for this photographer, I'm afraid.

Yes, when we finally reached an official view point, that's when we met quite a few who dropped in off the Parkway. 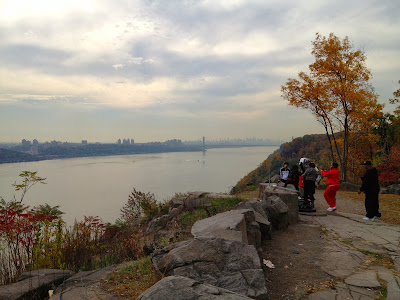 We could see our Bridge (yes!  Our Bridge!) seeming so far away.  I think it may have been almost 4 miles by this point?

Soon we were able to cross under the Palisades Interstate Parkway and after a short walk up along Route 9W (we could have taken the Chism Path in the Tenafly Nature Center, but that's a frustratingly awkward trail, so I opted for efficiency) until we reached Hudson Avenue.  Avenue?  Well, a dirt road, but one we turned down and soon we found the heart of my woods - the woods I grew up in: 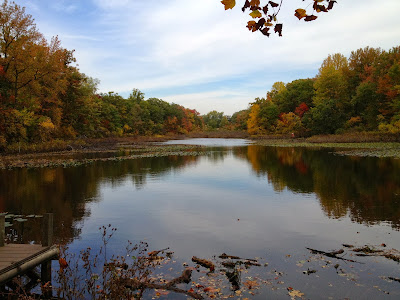 This is Pfister's Pond - where people like my father used to skate, my brother played hockey of a sort, and I understand teenagers would go and light a bon fire as they did some night fishing - or skating in the dark (talk about dangerous!).  I just used to get there by hiking through the woods from behind my house - there were never any blazed trails, you just went out and more or less to the left (after the boulders, you know what I mean?) - it was a place we all went.

Now, well, after being threatened with the prospect of silos housing intercontinental ballistic missiles in the fifties, the town pushed back and eventually established the Tenafly Nature Center. 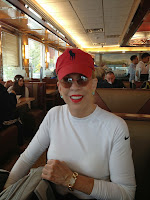 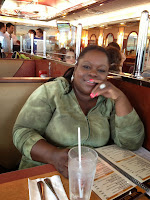 Well!  You'll have to come with me on the 10th to see and hear exactly what came next for us - but suffice it to say we were hungry.  We got to Tenafly's Classic Diner, and were ready to relax and eat!

Yes, indeed!  Pat, on the left, remembered her father's fondness for diners, so she summoned up a past fondness - and ordered grilled cheese with fries and a coke.  Linda and I, however, ordered chicken caesar wraps and were quite content.

Come on November 10 - and we'll see what's happening - we'll get out of town!

Posted by Tour Guide Bill at 3:38 PM No comments: