While I have no interest in baseball, I really enjoyed the thread of your conversation that morphed from baseball to beer to NYC history. Your vision of NYC and its rich history enliven and enrich. Thanks!
Posted by Tour Guide Bill at 12:09 PM 2 comments: 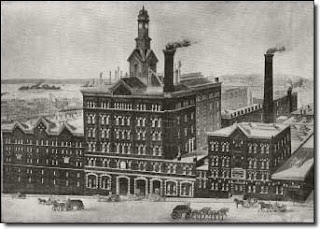 All right, Sports Fans, the ball season has begun, with vast visible rows of pricy empty seats, but what's real about baseball for most of us is that cry of "Beah heah!" that your groping in your pocket for change, dollar bills, you know - what you just really need to have to enjoy the game!

But the reality of it all is - it's just so damned expensive now. Yet, New York was crowded with brewerys just 100 years ago - and George Ehret's was the biggest. Anyone know that name? No? Well, then, just imagine being a child back at the beginning of the twentieth century, and read this:

"I learned to tell time by the only timepiece available to our family, the clock on the tower of Ehret's Brewery at 93rd St and 2nd Avenue [see above]..." And: "There was a spectacular pageant on our street, every workday of the year .... This was the passing of Mr. Ehret through 93rd Street, to and from the Ehret Brewery.

"Mr. Ehret rode in a dazzling black carriage, pulled by a team of prize black stallions. A footman and a coachman, in regal uniforms of blue and gold, sat on top of the carriage .... [I]n the morning the coachman would stand up and shake the reins and the stallions would charge down the hill in full gallop."

Yes! Imagine you're Adolph Marx, on the stoop of your home at 179 E. 93rd Street looking up the hill to your right - and this galloping sound greets you every morning at 9. Wow! Certainly makes a mere Maybach seem small, doesn't it?!

Who's Adolph? He, as with his brothers, didn't get the nickname we know him by until a fateful poker game when he was 25: Harpo. Read "Harpo Speaks, About New York" and then tell me you don't feel the joy of being a kid in New York all over again!
Posted by Tour Guide Bill at 9:50 AM No comments:

The First Blog by Bill - an Epic Event!

Not the biggest deal by far, for sure, but important nonetheless. Now, everyone, let's get prepared to receive news from the great "aroundhere" from TourGuideBill, who will attempt to keep his eyes open, his nose to the ground, and his chin up against every wise guy there is who would defeat him and make him depressed.

Now, that's not too much to ask, is it? After all, as a small businessman, a man of the smallest business, a man younger than his years in the forefront of his business, yes, shouldn't I be up-looking and positive about my prospects for great success as an independent and curious tour guide? After all, the guy from Hoboken said, if I can make it here --

Enough! What have you seen today, TourGuideBill?
Posted by Tour Guide Bill at 3:05 PM No comments: