Perhaps the most important addition to our neighborhood, and to Manhattan and New York generally, is the opening of the Franklin D. Roosevelt Four Freedoms Park on Roosevelt Island.

Originally known as Hog Island when Dutch governor Wouter Van Twiller purchased it in 1637 from the Carnarsie Indians, and then Blackwell's Island after a brief time when it was known as Manning's Island (his father-in-law, Captain John Manning, who captured it from the Dutch in 1666), its name was changed to Welfare Island in 1921 to highlight its main use since the opening of the Smallpox Hospital in 1856 as designed by James Renwick, Jr.

Since 1973, however, when it was named after our 32nd president, we have known it as Roosevelt Island.  Finally, and I'll wager that until recently many didn't even know there was this memorial planned, we have it on view. 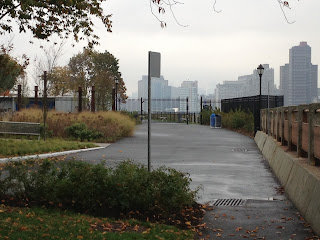 After getting off the Tram (which was opened in 1976 as a temporary measure, but has since become an attraction in itself - and is now integrated into our Metrocard system so that you don't need their own special tokens!), one walks back toward Manhattan (Roosevelt Island, in spite of itself, is part of the borough of Manhattan, by the way) and then to the left, walking down along the parapet.

Yesterday, October 24, 2012, was the so-called "Grand Opening." The weather wasn't quite so "grand," and continued damp and chill throughout the day.  It was perhaps more intimate, however, and I enjoyed communing with this environment.
I mentioned the Smallpox Hospital.  That is certainly an attraction, and one worth examining.  Let's see what we have to examine: 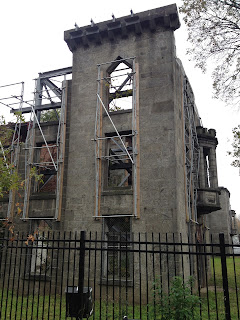 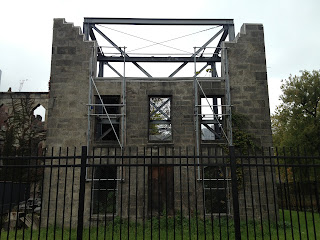 Well!  Not really inviting, is it?  But on closer inspection, the structure has been re-enforced a bit.  It was made a landmark on November 25, 1975, which put a stop (or at least a slowing down) to its continuing decay.

We can see, as we walk on down to the new park, other aspects of the building: 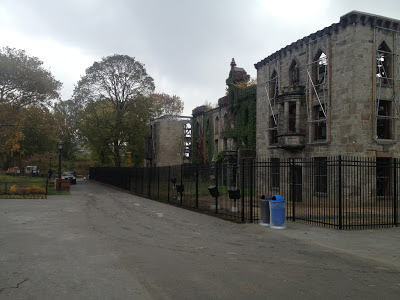 The east face of the Smallpox Hospital 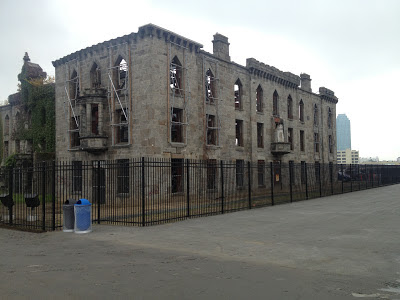 The Southern facing side

We have now arrived at the beginning of the park, which comprises just 4 acres.  Yesterday, I had to come down the eastern side of the island because of some work being done on the pathway.  In fact, as one looks at the picture just above, the ground in the forefront was quite slippery in the rain.  I have been assured, by the very person in charge, Ms Sally Minard, President of the Franklin D. Roosevelt Four Freedoms Park LLC, who was there yesterday morning (and who assured me that I was the very first tour guide of the city to be there!) that this situation will be corrected quite soon. 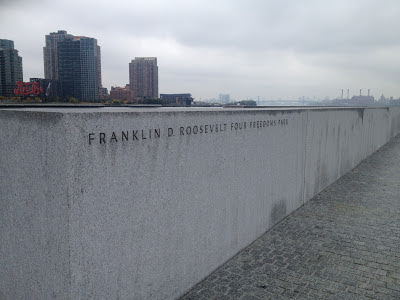 At first I was struct by the massiveness of the stone, and its comparative plainness.  Compared to what?  Oh, I don't know - maybe my imagination?  But - I'm not going to be a quick judge!  I'm going to stay a while and become acquainted with what is the last work of Louis Kahn, a great architect suddenly felled by a heart attack in Penn Station soon after he had drawn up these plans.  A little respect is only right. 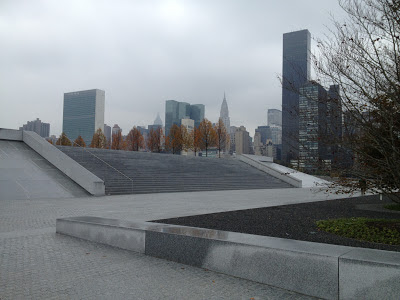 I was immediately struck by these steps.  There seemed something very inviting about them; with the sight of the trees in the near distance, even something inviting ... 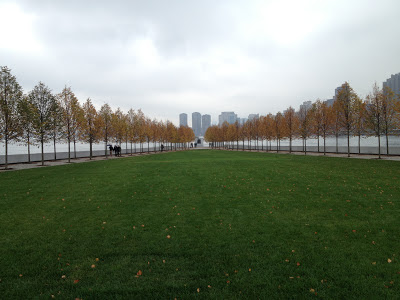 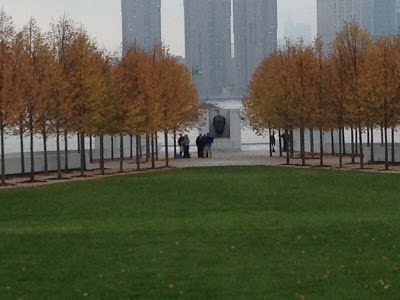 It's true, FDR isn't exactly in a spot light; look up to the top of this post, and you'll see him closer.  But on first approaching this memorial his head is almost a mystery.  Yet, well, he invites you to approach. 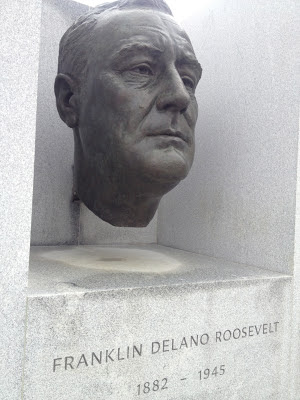 I felt it quite literally took my breathe away, and he died at only 63 years of age.

I walked behind this sculpture (by Jo Davidson), and saw the four freedoms that Roosevelt cited in his speech in January of 1941: 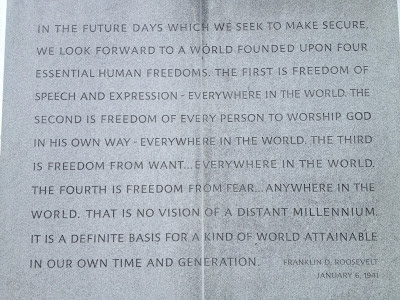 We are not there yet.

So, in the "room" that Louis Kahn designed, let's look out, and across the East River: 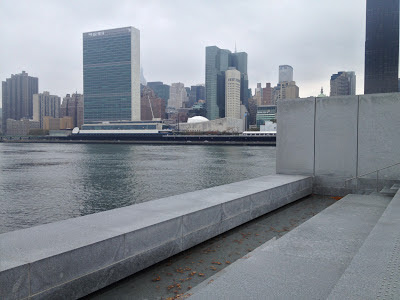 Can we at least hope?

Posted by Tour Guide Bill at 2:17 PM No comments: